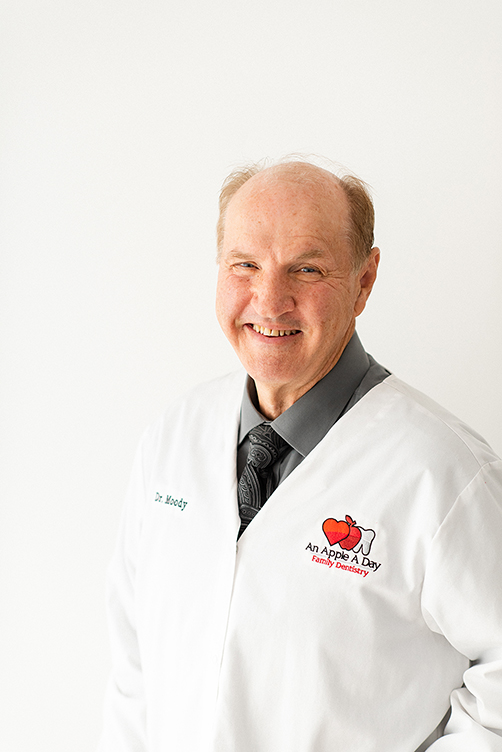 Dr. Moody has been practicing dentistry for over twenty-five years. He was born in Payson, Utah and grew up in Delta, Utah. He developed an interest in dentistry while attending Southern Utah University (SUU). After graduating from SUU, he was then accepted and graduated from the dental school at the University of Nebraska, home of the Nebraska Cornhuskers. He is still an avid football fan – Go Huskers!

His wife, Susan, and he then moved to Holden, Utah to raise their family and open the first Apple A Day Family Dentistry practice in Fillmore, Utah. Hopeful that he might someday be joined by his daughter, Dr. Moody opened a second An Apple A Day Family Dentistry location in St. George, Utah in 1997. In 2003, he welcomed his daughter back to St. George where they have been practicing together ever since.

Dr. Moody strives to be on the cutting edge of dentistry by attending continuing education programs offered through the American Dental Association and Academy of General Dentistry. He is excited to offer you the opportunity to experience the powerful combination of modern technology and an experienced touch.

In his spare time, Dr. Moody enjoys fishing, gardening, camping, and being with his grandkids. His favorite movie is ‘The Quiet Man’ with John Wayne and Maureen O’Hara. He also lists Thanksgiving Dinner as his favorite food and something unique about Dr. Moody is that he comes from a family of 11 children where he has seven brothers and three sisters.

Dr. Moody says the best thing about Apple A Day Family Dentistry is ‘the fun people I work with every day.’

This site uses cookies. By continuing to browse the site, you are agreeing to our use of cookies.

We may request cookies to be set on your device. We use cookies to let us know when you visit our websites, how you interact with us, to enrich your user experience, and to customize your relationship with our website.

Click on the different category headings to find out more. You can also change some of your preferences. Note that blocking some types of cookies may impact your experience on our websites and the services we are able to offer.

These cookies are strictly necessary to provide you with services available through our website and to use some of its features.

Because these cookies are strictly necessary to deliver the website, refusing them will have impact how our site functions. You always can block or delete cookies by changing your browser settings and force blocking all cookies on this website. But this will always prompt you to accept/refuse cookies when revisiting our site.

We fully respect if you want to refuse cookies but to avoid asking you again and again kindly allow us to store a cookie for that. You are free to opt out any time or opt in for other cookies to get a better experience. If you refuse cookies we will remove all set cookies in our domain.

We provide you with a list of stored cookies on your computer in our domain so you can check what we stored. Due to security reasons we are not able to show or modify cookies from other domains. You can check these in your browser security settings.

These cookies collect information that is used either in aggregate form to help us understand how our website is being used or how effective our marketing campaigns are, or to help us customize our website and application for you in order to enhance your experience.

If you do not want that we track your visit to our site you can disable tracking in your browser here:

We also use different external services like Google Webfonts, Google Maps, and external Video providers. Since these providers may collect personal data like your IP address we allow you to block them here. Please be aware that this might heavily reduce the functionality and appearance of our site. Changes will take effect once you reload the page.

The following cookies are also needed - You can choose if you want to allow them: